With the MGB now ready for the road, I’ve been thinking a bit about the future.

As much as I might want to think otherwise, my motorcycling days are coming to an end. Or at least a relatively long suspension. I’ve hurt my back in a way that will eventually require surgery. When I get a spasm in my back, it renders me immobile. I could hurt someone on 1,000 pounds (450kg) of steel going 75 MPH (120 KPH). It’s better to be in the cockpit of a car, where maintaining balance isn’t as necessary as when on 2 wheels.

So, I’m thinking about how to enjoy life with 4 wheels. I want to take Pearline to some car shows over the next few years. Maybe go to one of the big national meets where British car owners congregate. It would be fun to have a matching trailer for light camping along the way.

We towed a fifth-wheel trailer for 15 years, but I sold all that in 2017. It was fun, but carrying half your household in a 15,000 pound rolling castle meant that I was always repairing something. I’d like to have something simpler and smaller, that isn’t meant to spend a lifetime in, just a weekend.

That’s where teardrop trailers come in. They’ve been around for decades, but they’re becoming quite popular with the backcountry camping groups. The off-road models have 17” tires and a high suspension for getting over rock fields. That’s not what I’m looking for. I want something that looks like it was designed in 1965 and would match the styling of my car.

Here’s one from OKSchooners in Tulsa. It’s not quite retro styling, but it would look pretty sharp behind Pearline with her white paint and black rims. 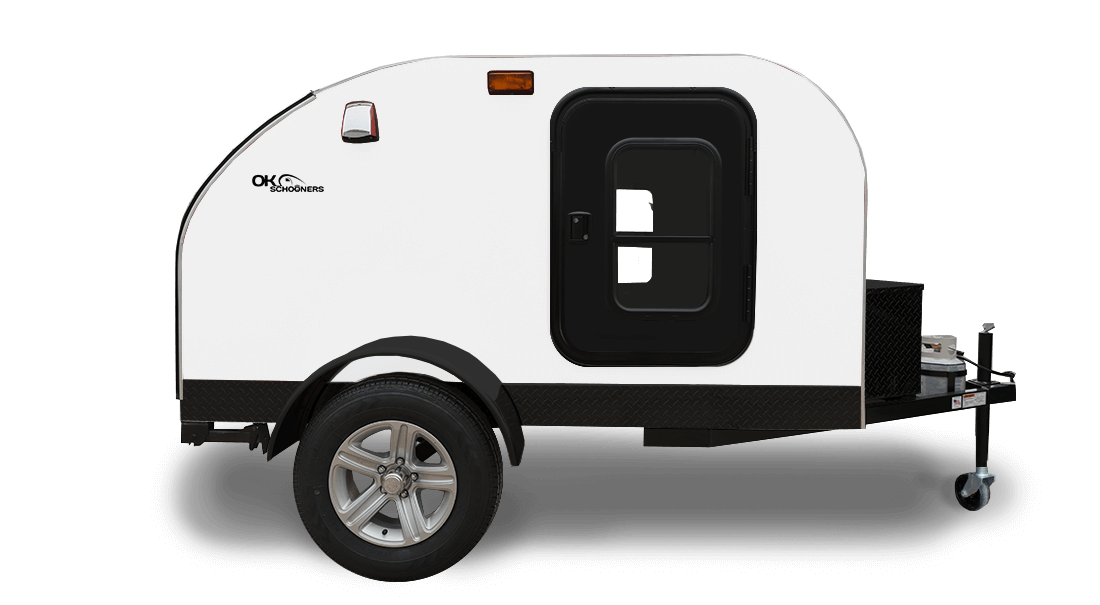 It might seem strange to be pulling a trailer with a 1,800cc 4-cylinder car, but the MGB is rated to tow up to 1,800 pounds, according the reference manuals that I’ve read and there are plenty of people on the Internet with stories of towing sailboats and small campers. I might not be doing 75 MPH down the Interstate, but I won’t be chugging along at 45, either. The teardrops that I’ve researched usually weigh around 1,000 pounds (more or less). That leaves a couple hundred pounds for food, clothing, and whatever equipment we want to carry.

I’ve looked at a couple dozen manufacturers of teardrops. The basic functions are all the same. Some have a better galley/kitchen area than others. Some spend a lot of work on the interiors. Some focus on all the things that can be attached to the trailer, like screen porches and bike racks. The problem with nearly all the places that build these things is that their existing orders are 15 to 18 months into the future.

I’ve run across a man locally that builds off-road teardrops in his spare time. His off-road models look nice. He wants to start building teardrops for classic-car models. I may work with him to design and build something exclusively for Pearline.

But, I’m getting ahead of myself. How will I tow this marvel if I don’t have a trailer hitch on the MGB? There are no commercial hitches available these days. However, a machinist in New Orleans named Keith Vezina has created a hitch design that most any competent machine shop can reproduce. I talked with him over email and he said many people in his local LBC group have put these on their cars with good results, even towing trailers larger than a teardrop.

I’m including the designs and some photos below from the New Orleans MGB group. These aren’t my work, but it’s always good to pass on community knowledge so that it stays alive.

You May Also Enjoy

One Step Forward, One Step Back

Sometimes, in fixing a problem, you make it worse.

We’ve had a bit of nice weather this week. Between bad weather and the general stress of dealing with COVID protocols, I felt the need to get out of the hous...

She’ll be Home for Christmas

Several months ago, I wrote about some fuel system issues after Angie and I went on a nice Sunday drive. It’s taken 4 months, but here’s an update.

Today is Pearline’s birthday. Exactly 50 years ago today, she came rolling off the assembly line in Abington, Oxfordshire, England.